What you see on vacation is up to you, but how you see it, is up to us!

Check out The Cruise Butler on Yelp 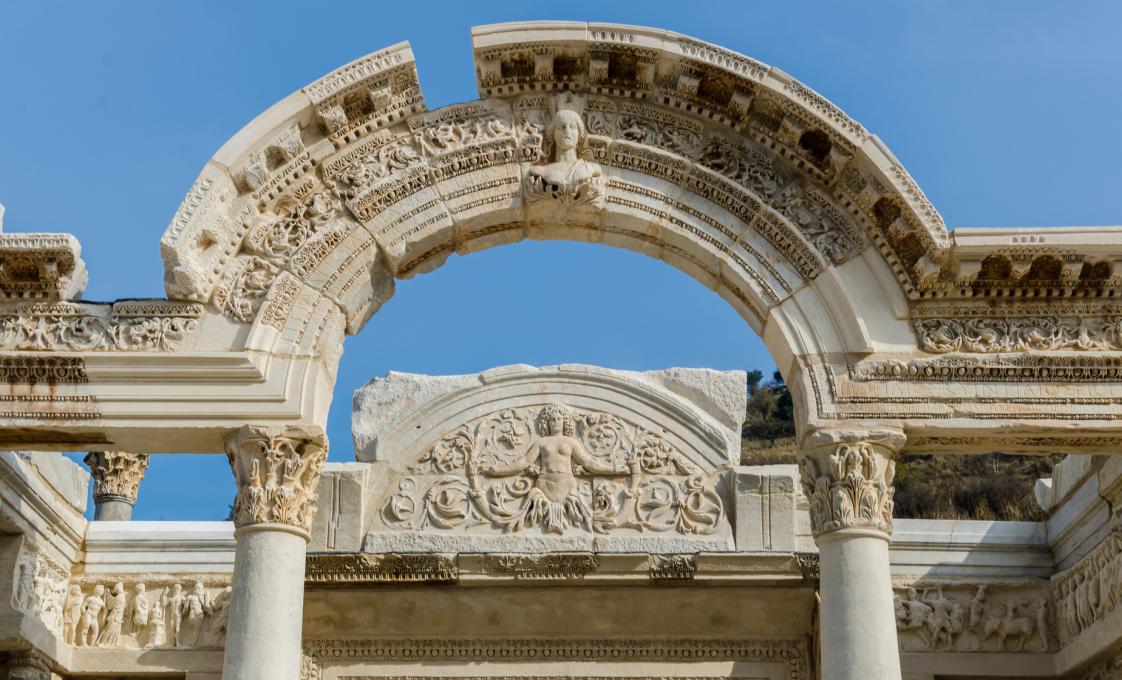 A great overview of Ephesus, St John's, a carpet demonstration/carpet shopping and a lunch of local flavors all in less than six hours.

Take in a great overview of Ephesus, St. John's, a carpet demonstration/carpet shopping and a lunch of local flavors, all in less than six hours.

Meet your professionally trained exclusive tour guide and set out for Ephesus, 30 minutes from Kusadasi. Famous in antiquity for its Temple of Artemus during the years of the Roman Empire, the Greek port of Ephesus became the greatest city in Asia Minor. You will start your Ephesus excursion at the upper Magnesia Gate and work your way down through the ruins of the city, ending near the ancient Harbor.

Along the way you will see the Forum, the Odeon, the Library of Celsus, the Thermal Baths of Scolastika, and the Great Theater, built in the Greek era and reconstructed in the Roman period. It has played host to programs as varied as Paul and his sermons to the Ephesians, to concerts by Sting, in part due to its remarkable acoustics.

You will walk along the Arcadian Way, where once Mark Antony and Cleopatra rode in procession. You will hear stories of Alexander the Great, the Virgin Mary, and many other famous visitors who walked the same marble streets that you are walking. Approximate time at Ephesus is 1 hour 40 minutes.

Following this visit, reboard your transportation for a very short drive to reach a small rug weaving village close to Ephesus, where you will be given information about this dying work of art as well as time for shopping. This is followed with a lunch of local dishes in the courtyard garden of the carpet center. Turkish salespeople expect you to haggle and quite often you can get 10-15% off the listed price. Treat it as an adventure.

Your last stop will be the Basilica of St. John. It is believed that the evangelist St. John had spent his last years in the region around Ephesus and was buried in the southern slope of Ayosolug Hill. Three hundred years after the death of Saint Paul, a small chapel was constructed over the grave in the 4th century. The church was changed into a marvelous basilica during the region of Emperor Justinian (527-565 A.D.). The monumental basilica, which sat on the highest hill in the area, was in the shape of a cross and was covered with six domes. Its construction, being of stone and brick, is an extremely rare find amongst the architecture of its time. Raised by two steps and covered with marble, the tomb of St. John was under the central dome, once carried by the four columns at the corners.

You will then return to the town of Kusadasi, approximately 30 minutes away.

More trips from Shore Excursions Group
ABOUT US
Shore Excursions Group was created with one goal in mind: to provide exceptional travel experiences to cruise passengers in the ports they visit around the world. To accomplish this, we have compiled an exceptional array of tours delivered by local experts with decades of experience serving travelers and delivering excellent tours. Our owners and management team are comprised of seasoned travel industry executives who leverage their considerable experience to deliver memories of a lifetime.

We are experts in providing exceptional shore excursions. We understand that in today's fast paced world, vacations have become an increasingly important way to relax, reconnect with family and friends, and experience new and interesting places. With this in mind, we provide the highest quality tours by performing extensive research, and detailed reviews. While other companies also offer excursions, we strongly believe our expertise and approach set us apart. The large cruise lines sell shore excursions - typically in very large groups visiting high traffic sites. We focus on smaller groups visiting more interesting and authentic locations using more personalized local operators. While the cruise lines are experts in delivering cruises, we are experts in delivering shore excursions.

Our Approach
We believe quality service is not only highly valued by customers, but ultimately leads to better experiences and higher satisfaction. Unlike the cruise lines and other tour companies that rely almost entirely on websites, we encourage customers to call us. We want to invest our time answering your questions, providing input, and selecting the excursions that best meet your needs.

Our Tours
Our goal is to provide customers a wide array of exciting, appealing, and enriching tours. For those customers who prefer to travel in smaller groups with more personalized service, we offer a wide variety of small group tours around the world. These tours generally range in size from 2-12 people compared to larger tours which can number up to 50 people. While exploring the destinations and ports on this website, feel free to search for these "Small Group Tours". For those customers interested in private tours, we offer many outstanding excursions that allow you to travel with your party alone and, in many cases, to fully customize your tour. Search for "Private Tours" if you are interested in this experience. Our "Scenic" tours provide up close and personal access to some of the most spectacular natural environments on Earth from majestic glaciers in Alaska to spectacular reefs in the Caribbean. Our "Cultural" tours allow customers to experience local customs, entertainment and culinary delights ranging from tribal dances in Alaska to an outstanding local meal in Santorini, Greece. Our "Active" tours offer a multitude of exciting and adventurous ways to experience our destinations. Our customers can kayak the turquoise waters of the Caribbean, hike to a spectacular waterfall in Hawaii, or bicycle through quaint villages in France. Our "City" tours allow travelers to see the highlights of great cities around the world with unique insights provided by our expert tour guides.

Our People
In our experience, exceptional travel experiences are almost always delivered by exceptional people. With that in mind, we utilize a comprehensive approach to select and employ the leading tour guides and tour providers around the globe. We hold our people to very high standards which we measure by our comprehensive Quality Control process and, most importantly, by our customer feedback, which we will actively seek from each of our customers.

Our Owners
Shore Excursions Group is owned by seasoned travel executives possessing extensive experience across many sectors within the travel industry.

Price ID: 7622503
Must be Purchased by: May 3, 2024
Tour Type
Group
Group Size
Standard
Activity Type(s)
Cultural
Tour Duration
5.5 Hours
Activity Level
Moderate
Tour Leaves From
Cruise Ship Pier
Food/Beverage Provided
Lunch
Special Instructions
We recommend wearing comfortable clothing and closed toe, sensible walking shoes. Sunglasses and sunscreen are suggested.
Restrictions
Walking at Ephesus is over actual streets / sidewalks from ancient times which are uneven and worn. There are steps without hand rails and packed dirt that must be navigated in some areas. To access St John's guests must climb a cobblestone and packed dirt path to reach the site. There are several uneven steps to navigate. The tour is not wheelchair accessible.
Contact Us
Terms & Disclaimers

Prices, additional fees, itineraries, and availability of this product are subject to change at any time. Please contact us for more information.
If you are interested in an offer, please click on Contact Us . This will open a "Trip Request" that will allow you to send your request to us. We will be able to confirm availability and make further recommendations.
Walking at Ephesus is over actual streets / sidewalks from ancient times which are uneven and worn. There are steps without hand rails and packed dirt that must be navigated in some areas. To access St John's guests must climb a cobblestone and packed dirt path to reach the site. There are several uneven steps to navigate. The tour is not wheelchair accessible.